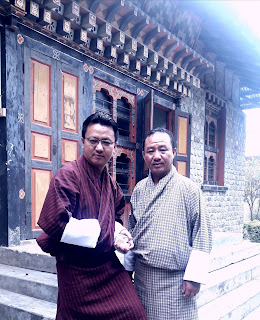 Bhutanese people will once again go to the polls to choose their National Council (NC) candidates tomorrow (April 20, 2018). But doesn't it seem just like yesterday that we elected the current batch of NC members? This is impermanence in action. An end of one thing is the beginning of another.

This year’s NC election is significant for two reasons. First, compared to the previous two elections, this year we have as many as 127 candidates contesting for 20 seats in the Upper House. In the second NC elections, we had 67. In 2008, the number was only 52. Although more candidates would cost more to the state it is a healthy symptom. It means people are now confident and think of leaving their footprints in our democratic process. More is more. Our people are given more choices.

Secondly, Election Commission of Bhutan (ECB) tried something new this year to allow more Bhutanese to vote. In the past, civil servants and armed forces had postal ballot facilities. Earlier a voter was voting by post. After ticking on her choice of candidate, a postal voter had to post her ballot. But this year, ECB modified the postal ballot system slightly in that voters could vote at the designated places of their choice. Though they were not voting on EVMs, the close-to-real experience of the process inspired voters across the country. Some civil servants however chose to vote in the conventional manner by choosing to post their ballots. We hope ECB extends the same facility for the two rounds of upcoming National Assembly elections.
But it would benefit thousands more if such facility is also extended to those working in the private sector. After all we want more people to participate in the process and increase voter turnout.

And finally I would like to wish all the candidates in 20 dzongkhags all the best. May the best and deserving ones win.