Driving with a 'Horn' 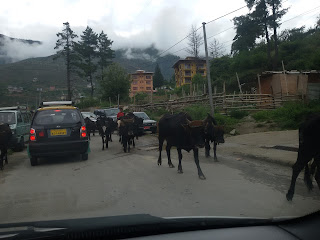 A certain senior Bhutanese government official, we were told, was on a state visit to a neighboring country. It was also his first visit to India. And back in those days traveling that far was really far from one’s home and our way of life. The official could only read Dzongkha and not English or Hindi. He could not read those fancy messages that big trucks carried on them as they were driving from the airport to the hotel.

Unable to decode anything, the official asked his driver, “What is written on that?” pointing to a truck in front of them.

“It says phir milinge in Hindi and it means See you again,” his driver explained. And then as they continued their journey they spotted another truck carrying, this time, an assortment of different alphabets.

“So what does that say?” the official asked, curious again.
“It says ‘Blow Horn’ in English,” the driver told him but had no time to explain what it meant.

Once the meeting was over, the Prime Minister and his ministers were biding their important guest goodbye by shaking hands and saying, phir milinge… phir milinge.

But they could hardly understand why their guest kept on repeating, “Blow horn, blow horn… blow horn.”
~~~
Some of us drive with our ‘horns’.

By nature, Bhutanese are kindhearted people. But again, we form a group of most impatient people on earth. We complain having to wait at the hospitals, banks, ATM queues, bus stations, roadblocks, traffic jams, wang ceremony or receiving an important official. The culture of waiting is yet to be developed and ingrained in our genes.

Traffic regulations say drivers are to avoid honking near the Dzongs, schools, institutions and hospitals premises. And now maybe we should designate a few more places where honking should be avoided - in the deep forests for it pushes away wild animals from their settings. Honking disturbs the sick in the hospitals and students in the process of learning.

Is there any other alternative to blowing horns? And maybe we might need to demand the authorities some form of policies on this and find some kind of alternatives to this nuisance. If we could afford to ban so many things in the country, we can for sure afford to do away with honking in the towns and cities.


Let’s do away with our ‘horns’ irrespective of the time of day for everyone deserves to sleep in peace, drive home happy or smile in the office all day long. And every pedestrian deserves to walk home without being honked at.

P.S - A section from an Opinion piece published in Business Bhutan