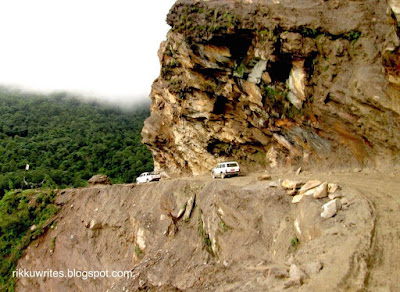 Our fellow blogger Riku Dhan Subba, who recently traveled to Trongsa, reports, "The road condition is very very bad. Muddy and slippery, all vehicles skid along." And he adds "Often, there are falling boulders and soil from right above the road. Since road widening project is going on, most cliffs are freshly cut and very fragile."

This made me go through my old files to find something I had written about Monsoon and our road widening, way back in August 2011. Nothing much has changed even now.

There were about two-dozen vehicles, big and small, ahead of us, all waiting for any likely help. The officials and laborers had gone home after yet another tiring day at work. I am sure the team did not even enter through the threshold of their houses when this happened. Once again and on the same location! Now they were totally exhausted. And with that, our hope of crossing the site on the same day was gradually dying. As the clouds were darkening our worries of being stranded on the highway that night, stuck us dear. Heavy boulders kept shooting down the cliff. It was one dangerous site on the highway.

“We never had such problem on this stretch before,” one of the senior drivers was saying, not to anyone in particular. “Although it was quite narrow, the road here was quite stable and we never had landslide here. It is only after the road widening works have started that the condition of this road has become like this.”

Others could not help agreeing with the man. 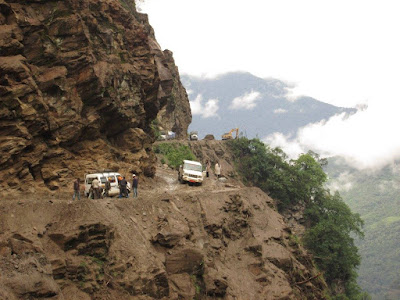 But after a while, someone had informed the traffic police and RSTA officials about the major landslide, which had totally blocked the road. And to our surprise, officials responded immediately and reached the scene. We were delighted knowing that some form of help was coming our way. But in the back of our head, we still doubted whether the block could be negotiated on time or else we would end up spending a sleepless night on the road. I am sure our prayers were heard in the heaven.

And similarly, there were so many other vehicles wishing for the same at the other end of the block.

Having a bus full of people was an added advantage. Understanding our plight, the road officials wasted no time before they took the matter into their hands. It was a gradual process though for as soon as machines had successfully cleared the debris, fresh boulders and stones fell off. It was a hectic process. When the officials had cleared the obstacles successfully we were greatly relieved. But bigger and riskier challenge remained before us; now to cross the block site as rocks continually kept shooting from above. Anything could happen.

One car after another, officials directed the traffic. Vehicles before us passed without any event, but to our horror, the officials gestured us to stop when our turn came. Their eyes were looking at the rocks above the road. We could literally see nothing since there was a sharp bend before we reach the actual site. We were terrified. We knew something was wrong. If we didn’t go it was a problem for us and if we continued there was a great risk. And when the officials gestured us to proceed, we were even more terrified. We thought they were taking chances on us.

But thank Buddha, nothing happened to us and we could safely cross the danger prone area. What a relief it was! But our hearts continued beating at great speed pace even after we have driven15 kilometers away from the site. It was truly an evening worth remembering. 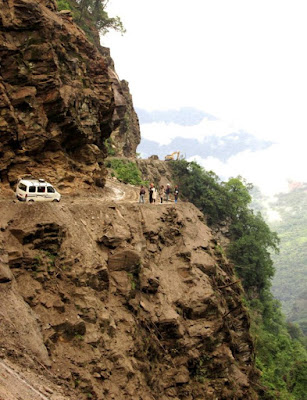 Today Monsoon is in full swing and we hear of frequent landslides everywhere, which is even more aggravating than being held up for days in the border towns owing to strikes in our neighboring Indian states. And although most of our national highways are broader and safer now, we have at some places on the highways where road-widening process is underway. With the process of development, there is an urgent need to widen our national highways. Driving on the broad and comfortable road network allows us to travel faster and affords safety too. Commuters take less time to reach their destinations.

In the beginning, our roads were narrow. It was good enough with fewer people owning cars. But now we have more vehicles plying on the same old roads. And now there is an urgent need for double-lane highways. Our country has realized all these and initiated the massive road widening initiatives. It is always encouraging to see people working hard on the road. We are thankful to DANTAK, which has carried out a commendable job in the past five decades. We extend similar appreciation to our own PWD.

But our personal experience tells us the national highway-widening process should be made seasonal. We think it is more appropriate if such work is undertaken during dry seasons only when the soil condition is stable and there is no or less rain.  When topsoil is removed and the remaining exposed layers are loosened, it becomes easier for the rainwater to seep in. Frequent blasting that happens weakens the landscape features. And the recent landslide that we encountered at one of the most stable sections of the highway goes on to justify people’s assumption.
While we understand the importance of road widening process and greatly appreciate the initiatives, work, especially on loose soil should be saved for drier seasons. If it is at all possible, we should avoid the widening work during the rainy season, during which our efforts should be directed at clearing the blocks. This way we would cause our natural environment a minimal damage and avoid frequent landslides. This way we provide increased road safety to our commuters.

Note: Pictures are taken by Riku. Thank you for allowing me to use them.