The Bank in Your Pocket

May 26, 2015
May 15, 2015 marked another milestone in the Bhutanese banking sector. The country's oldest and the biggest bank, Bank of Bhutan launched its Mobile and Agency banking. The Finance Minister, Lyonpo Namgay Dorji presided as the Chief Guest. The launch was attended by the other dignitaries, government officials, media personnel and the partners.
While Bank of Bhutan already had basic Mobile banking, which provided sms alerts (on amount more than 5,000 BTN) on deposits and withdrawals, or do a balance inquiry or view last transactions, the current facility with many modern and additional features. This one comes with a cool app - M-BoB. With the coming of 3G network and better connectivity, more and more people bought smartphone. But that is not all - other customers, who still use basic phones can also avail the services using Unstructured Supplementary Service Data (USSD) - *262#. And where there is no Internet connection, USSD comes in handy even for the smartphone users.

According to Bank of Bhutan officials, "the Mobile banking technology shall not only make it easy for the customers to bank anytime and anywhere,"  but it will also promote "cashless transactions" geared towards a cashless society. It will also go a long way in conserving the environment. I hope once all people go Mobile with their banking needs, having to take care of a lot of used recharge vouchers that are scattered everywhere would be a thing of the past. It is said that at least 10% of a country's GDP goes into the cost of printing currency notes and cashless transaction will help reduce the cost of printing notes. 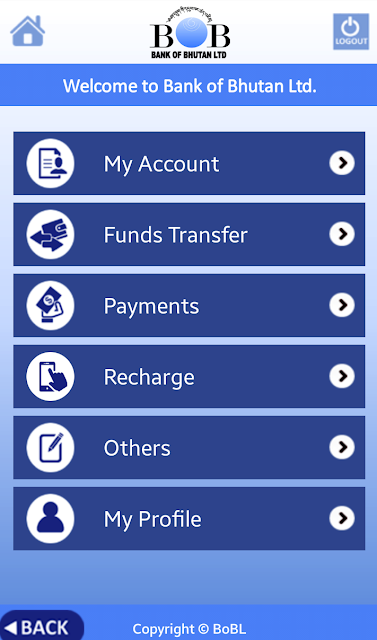 Customers now can pay all their bills online (especially if you hate standing in lines), including shopping, hotels, tickets among others. And now we can bank from the comfort of our homes, offices or while on stroll out in the country side. This avoids a lot of hassles where time is equated with money.

That is not all - customers also can deposit and withdraw cash, and pay bills with the agents (appointed by the bank in various locations) where there are no bank branches or ATMs. This is expected to promote financial inclusion of the rural farmers, who now remain unbaked.
And with this cool facility you can send money on mobile numbers and the other person can withdraw using the ATMs or agent.  BoB Charo service is aimed at people, who do not have accounts with Bank of Bhutan, but can use the Mobile and Agency banking services.


But the best is yet to come. In the coming weeks and months, the bank plans to introduce language options: English or Dzongkha. Currently, it uses English. It also plans to have a card-less cash withdrawal from ATMs by generating temporary pins on your mobile phones. And most interesting of all, customers will enjoy Near Field Communication (NFC) payment facilities, which will be useful to our taxi drivers. This is exciting time for Bank of Bhutan customers. 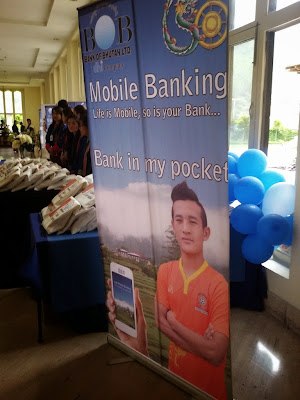 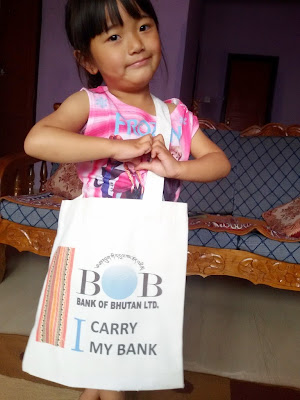 From the trials and transactions I have done so far, I am quite happy and satisfied. And once I explore this facility fully, I would be able to make better and more critical comments in the coming days and weeks. But for now, I am all praises for the team behind the Mobile banking. I would like to congratulate Bank of Bhutan for going beyond their mandates in bringing out the best for their customers.