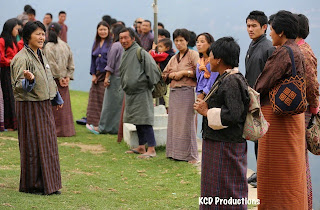 Today (July 25, 2013) People's Democratic Party (PDP) announced the members of the Cabinet 2013-2018. And as many expected the nation rejoiced the coming of first democratically elected woman minister - Aum Dorji Choden, an MP elect from Trashigang was appointed as the Minister for Ministry of Works and Human Settlement (MoWHS).

The following information is from Kuensel:

Dorji Choden, 53, is from Lamey Gonpa, Kangpara gewog. She has a Bachelor’s degree in Civil Engineering from Birla Institute of Technology, India, and Masters of Arts in Public Administration from Syracuse University in the United States. She served for over 20 years in different capacities. After working as a commissioner for Anti-Corruption commission, she resigned to contest 2008 elections as a PDP candidate. Upon losing the elections, she worked as the Assistant Resident Representative, UNDP, but resigned again to join Druk Nyamrup Tshogpa as its president. She joined PDP again for the general elections. She has two children and has seven siblings.

I would like to congratulate Aum Dorji Choden and Bhutanese people in general for this. This is a GIANT first step towards gender equality. We are not quite there yet, but headed in the right direction. Tashi Delek!