Not to the sound of clashing cymbals 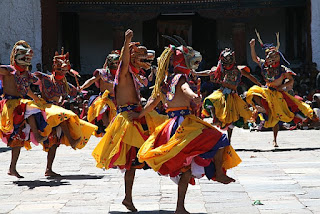 What a show!
Finally, it came to an end with the crowning of second Miss Bhutan. I would like to congratulate all the winners and other contestants for having had the wonderful moments of their lives.
But what captivated me the most was the moment when the Miss Bhutan 2010 Pageant Finale started at Nazhoen Pelri yesterday. This made me wonder if I was dreaming because I thought Thimphu Tshechu has already ended by then. But the dance by some odd musical troupe at the show featured a group of men wearing masks dance alongside a group of beautiful dancers to the tune of a song played aloud on the loud speakers instead of dancing with their feet in complete sync with the clashing sounds of cymbals at the tshechu ground.
It was truly out of place. People watching the show, especially if they have watched it closely would have felt embarrassment warming their cheeks. I clearly felt embarrassment biting into me.  So much for the preservation of our culture and tradition!
I heard mask dances are being performed for tourists on request. But  let's leave that for another story.
Next time if our students wear various masks and shake their bodies to the tune of Dechen Pem, Jigme Nidup, Namgay Jigs, Namkha Lhamo, Rinchen Namgay, Lopen Yeshi Wangchuk, et al for the annual concerts, I would hardly be surprised.  The precedent has already been set.