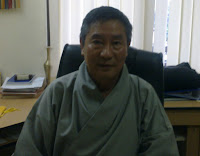 The other day, (31st August, 2010) Bank of Bhutan formally welcomed Mr. Passang Tshering as its new Chief Executive Officer with the offering of Tashi khadar by employees in Phuentsholing. His appointment comes after the former CEO, Mr. Kinga Tshering was appointed as the Project Director for Education City.
Mr. Passang started his career in the bank in 1977 and has served in various portfolios. Before his appointment as the new CEO, he was serving as the DMD of Corporate Service Department (the largest department in the bank). He is a man of large banking experience, aptly qualified for the new job; a proud product of BOB.
Of course many challenges remain ahead of him and the bank in general. But all the employees are fully confident that he will definitely leave his footprints in the history of the bank. We would like to congratulate him for his new job and wish all the best in his new venture as the new CEO of the bank.
To this effect, BOB requested BBS bureau office in Phuentsholing to cover the happy event. The day was important for 200,000 plus BOB customers and 700 plus BOB employees. Customers have the right to know who is heading their “Own Bank”. It took half a day for BBS bureau office to decide and respond. When they responded they said it was not in their editorial policy to cover such events. What a policy! BOB just wanted a few lines to be said on Live National Television about the change in the CEO. They justified that if they covered for BOB then there will be so many other organizations who would expect them to do the same.

And no media have, it seems, covered the news.