Fake notes printer out in Real 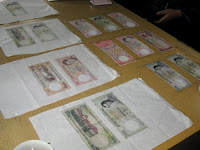 This weekend the media fed us with this news about this Indian vegetable vendor apprehended by RBP in Phuentsholing, who was alleged to be supplying fake Bhutanese currency notes to Bhutanese counterparts. The way he printed the notes was something out of a movie just as the way he was caught red-handed by police. Now that we have caught him, we should be in a position to track down the Bhutanese who were after easy money. I am sure the Indian man would at least have some information or how else how could he have possibly done business without any information about his clients.

Kudos to the men in the uniforms- you have done a good job once again in tracking down the man, but now you should not stop until the other perpetrators of this crime are brought to justice.
And see, it worries us all now. How can we be sure that the notes we have with us  are genuine? And for the banks, they have the fake note detecting machines. Carrying a fake note mixed with the genuine notes is possible now with the circulation of counterfeit notes in the market.We just have to a little careful.
(Photo: Kuensel)