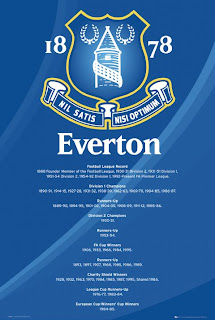 I have never been much of a TV fan, but of late a feeling that I-got-to-have-it-by-any-means was so strong that I had to buy one last Sunday. And what a coincidence! Everton happened to play Burnley that day. Even before the television set was in place I called the Cable Operators and they said they would be right there.

At around 6 PM, the Cable Service had sent two linemen to my house. I was as excited as hell. After 6-1 defeat by Arsenal in the game 1, Everton has to pull in their socks, I thought.

I grew impatient. The linemen seemed to take much longer than I thought they normally would. And to top it, they constantly kept going to fetch different tools and equipments. The younger guy returned with an old piece of cable, which wasn’t working. Next the older man went only to return with another one that was bit too short. It took both of them together to get the right cable. I prepared them tea and some snacks. I knew they would take some more time. And they did.

Then my TV refused to tune in to any channels except Cartoon Network. Of 45 or so channels, why Cartoon Network? Maybe as someone who was brought up on farms, my karma was tuning in late. It was only later I became fan of Tom and Jerry shows. But late karma aside, the two men were helpless. I couldn’t believe what they were saying. How could someone whose only task is to do that be so helpless? Maybe I was getting carried away by the frustration.

They promised to inform someone in the office. I didn’t want to believe them. I felt like lifting the new television set and flinging it from the third floor window. But I resisted the urge. If my father was a minister, you could have seen the remains of a shattered TV in the courtyard the next day. I wanted sleep, but sleep didn’t want me.

Then when I was to fall asleep, my doorbell rang. The guys from the cable service gave me a bull’s surprise. Maybe I could watch the game analysis after all. By then I knew Everton didn’t win again.

After examining for 10 or so minutes, the new man concluded something was wrong with the set. Come on man, I just bought it this evening! He was helpless too.

Monday - my uncle and I called the shop. The proprietor volunteered to look at the set himself. He knew we were not pressing the right button. Like the three men the day before, he too tried only to confirm something was really wrong. It was memory problem, he told us, still difficult to believe he sold such a thing to me. In his 40 years’ business experience, mine was a unique case. Unique case indeed, a television set with no or limited memory! I don’t know what that means. His face carried a unique writing as well.

But it is interesting; how of all the buyers, I happened to the recipient of a set that was unique? And why that too when Everton was playing? Was it some unseen forced or omens? The club lost the match. I could not watch the game. And a Shitty Sunday for me and for Everton FC!