It is in your right to Smoke your Life 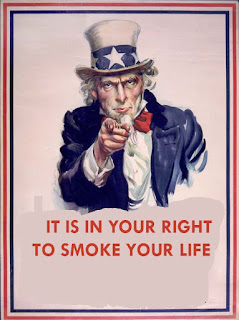 Everyone has the right to smoke, be it in his/her bedroom or choesham or even when someone is sleeping or lay in bed half asleep. And rightly so because we now live in a borrowed culture and have written constitution that protects an individual’s right. An individual can exercise his/her rights fully provided if it does not clash with his/her duties. In smoking I find a serious conflict of individual liberty with the social duty. There is a thin line between an individual and the society for what is a society without individuals and by the same token, what are individuals without the society?

People are of different likes and dislikes. Milk for one person can be poison for another and vice-versa. Smokers claim it is in their habit to smoke even when it is against the nonsmokers’ wishes, but that's an assumption that people around them may not mind their habit. You see, smoking in the midst of nonsmokers calls in for a serious question of conscience and morality. Of course a crowd of nonsmokers cannot stop one who smokes from smoking. But then as much as he has the right to smoke, others have the right to breathe too.

Now chewing or smoking is fine unless it is carried out at proper places. Thanks to the government, people are no more allowed to smoke in the public transports or in the public places. But are the rules followed, is the big question. The work place becomes a dungeon when one finds it difficult breathing in the air.

These days it is fashion to smoke even in the offices. If you visit some of the offices, including mine, you will find people confidently breathing out smoke through their nostrils or highly smoked lips before it slowly rises in the air. The act is done with so much pride and vigor. And hotels are even worse. Some bars have become the cremation grounds.

You see, my plea is not for the smokers to quit smoking altogether. That’s impossible and frankly, I am not that powerful to order it. I have no grudge against any smoker, but for god’s sake please respect us the passive observers. Office is a place where people work in the best interest of a nation and its people, hopefully. For civility's sake, please resist the urge of smoking in the offices.

And finally, we live in a world filled with signs and symbols. For instance, if a man blows a puff of smoke on a woman’s face, the man is said to be inviting the woman to sleep with him. But blow that same puff at another man then, you are asking for troubles. For courtesy’s sake stop blowing smoke even at the strangers.


P.S: I owe apologies to those who had to hear this crap once again from a person like me. Sorry, please take it lightly!